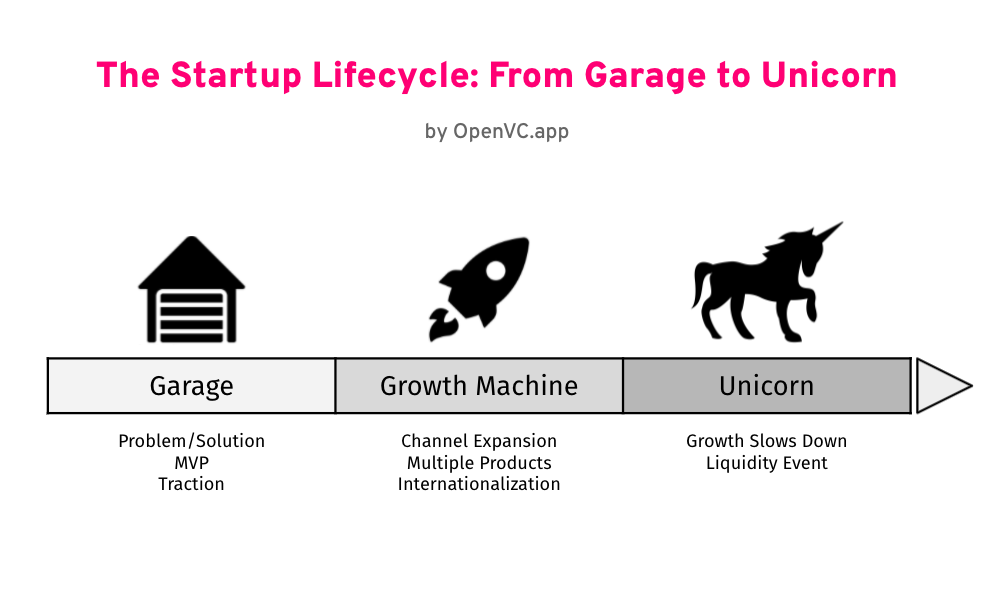 What is the typical journey of a successful startup? Four experts took a shot and tried to answer this question.

The startup lifecycle according to Steve Blank

What do I do now, Steve Blank

Steve Blank's article deals with that gray area founders find themselves in which lies between being a nimble startup and being a large company with established procedures and processes. He outlines the search, build, and growth phases of companies.

In the search phase, the goal of a startup is to search for a repeatable and scalable business model. It requires flexibility as it takes multiple iterations and pivots to find a product market fit.

Companies have a "do what it takes" mentality to achieve success at this stage. They are rather small (less than forty people) and are most likely using funding from a seed round or Series A. Many startups fail to move onto the next stage and die here.

Build - Scaling up customers and headcount

Once a startup reaches this phase (and begins hiring more than forty people), the company must transform into one that can scale by growing their customers at a rate that allows for positive cash flow.

This phase begins with around forty employees and can last until the company has between 175-700. If the company is venture backed, this is where a Series C or D takes place.

The "do what it takes" mentality that worked so well in the previous phase becomes less effective and could be chaotic. The company needs to have things in place such as culture, training, product management, processes and procedures.

In the final phase the company has achieved liquidity. This is the result of an IPO, the company having been bought or a merger. The company continues to grow and has repeatable processes. The Key Performance Indicators (KPIs) processes and procedures from the previous phase are now commonplace.

The startup lifecycle according to Morgan Brown

What problem does this product or service attempt to solve? Does the solution effectively solve it? If there is a clear answer and a yes to these questions, then founders have a hypothesis to test. This is the stage where the founder needs to do heavy market research and talk to target users, asking them questions in an attempt to find their pain points. This will provide enough information to build a viable MVP.

This is the stage where you build a viable MVP using the smallest amount of time and capital in order to prove demand and test customer behavior. Once it is released, it is all about finding initial users and seeing whether they remain with the product or abandon it.

The MVP has gained traction and you are iterating from customer feedback. There may be paying customers and repeat customers. This is often a sign that there is product market fit. At this stage, founders should measure retention rates while surveying users to see how they feel about the product. The channels that are providing users should also be experimented with and explored.

This is where you double down on the channels that work. Growth experts are hired and given budgets and support. You build a growth playbook (the processes that define and grow the company) for each channel.

As the company matures, growth slows, but it doesn't stop. Even Facebook and LinkedIn continue to expand and grow. New channels should be discovered and pockets of new possible users should be approached. At this stage, you look to expand aboard. This is also the stage where acquisition opportunities come into play.

This chart has all five stages illustrated.

The startup lifecycle according to Brian Balfour

Brian Balfour argues that a startup goes through three phases of growing. These are traction, transition, and growth.

The majority of startups are in this phase.

The goal in this phase is for the company to find their product market fit. The most important metric is retention at this phase. The company needs a steady stream of users while the company experiments with a few channels to keep that flow of users coming in.

The team at this stage is usually the founder with the part time support of a designer or developer.

The transition phase is where the foundation of a process, team, and tools are built so growth can increase.

The goal in this phase is for the startup to identify, define, and understand the growth levers for the business. The most important metric to start tracking is growth rate on either a weekly or monthly basis. The growth rate will be what guides the company going forward. The company needs to increase the stream of users and focus on the one key channel that works.

The team at this stage should be a dedicated growth team with one leader (the VP or growth or PM) and a designer or developer.

The growth phase is where the company kicks it up a notch. The goal is to focus on growth levers and take them to the next level. The metric during this phase is the growth rate and the payback period. The payback period usually increases as a company grows. The channels become competitive (and saturated) and the capital restraints of the company loosen up.

The stream of users needs to be turned into a firehouse at this phase. This is also the phase where new channels can be opened up (as the primary channel could be saturated at this point).

The team at this stage is expanded with one growth executive leading the charge and multiple growth PMs who have their own team of a developer, designer, data, and channel specific talent.

The startup lifecycle according to Reid Hoffman

Reid Hoffman defines blitzscaling as "what you do when you need to grow really, really quickly. It’s the science and art of rapidly building out a company to serve a large and usually global market, with the goal of becoming the first mover at scale."

Focusing on scaling an organization is paramount as an organization’s size and its ability to execute determine whether it can capture customers and revenue. He breaks this down by family, tribe, village, city, and nation.

At the family scale, the company is raising money and still figuring out their offering. They most likely have not launched a product yet. Employee numbers are in the single digits.

At the tribe scale, the startup is just starting to become a real company. Some version of the product or service has been launched and the target market has been identified. Blitzscaling could begin here if there is a runaway hit of a product or service. Otherwise, there are still uncertainties that the company can scale massively. Employee numbers are in the tens.

The blitzscaling process usually begins between the tribe and the village scale. At this point, competitors and new entrants attempt to enter the space. The company has to have an edge that distinguishes them from other competitors who most likely are following conventional wisdom. Employee numbers are in the hundreds.

In going from village to city, specialization at all levels becomes more important. Companies need to know how to run entire departments and deploy capital for marketing. Key KPIs need to be established and followed. Reliability needs to be higher and what worked at the village level may not work here. Companies at this scale have one central revenue stream but may have more than one product. Companies also go global in the city scale. Employee numbers are in the thousands.

The nation scale is when the company is truly global. Users may be in the millions or tens of millions and spread across the world. The company may be in multiple geographies and have more employees outside of its home country than within. Employee numbers are ten thousand or more.

Putting the startup lifecycle together

The illustration below sums up the startup lifecycle according to each of these authors.

After the obligatory “garage” phase, all models converge to a single common point: the PMF, or Product-Market Fit. Then the startup gradually expands into several channels, several countries, and several products, and becomes a scale-up, or growth machine in the words of Brian Balfour. Eventually, the last stage is a stabilization of the startup, because of the growth slowing down (Morgan Brown) and/or because of a liquidity event (Steve Blank).

For more information on company stages, especially in regard to funding, click here.

OpenVC is the front door into venture capital. We help tech founders find the right investors to grow their business. Radically free & open.

Easiest way to launch your funds and SPVs 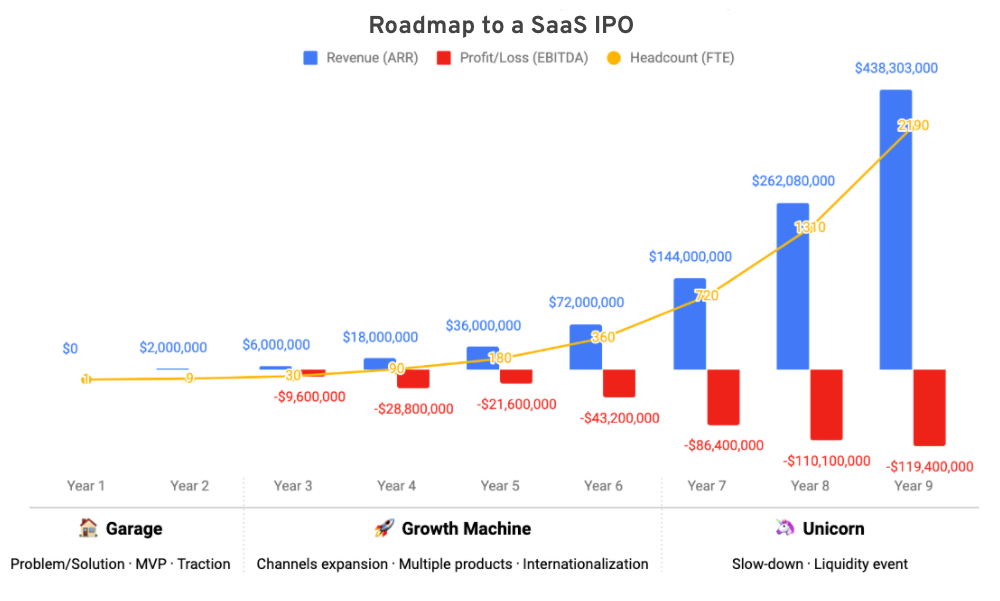 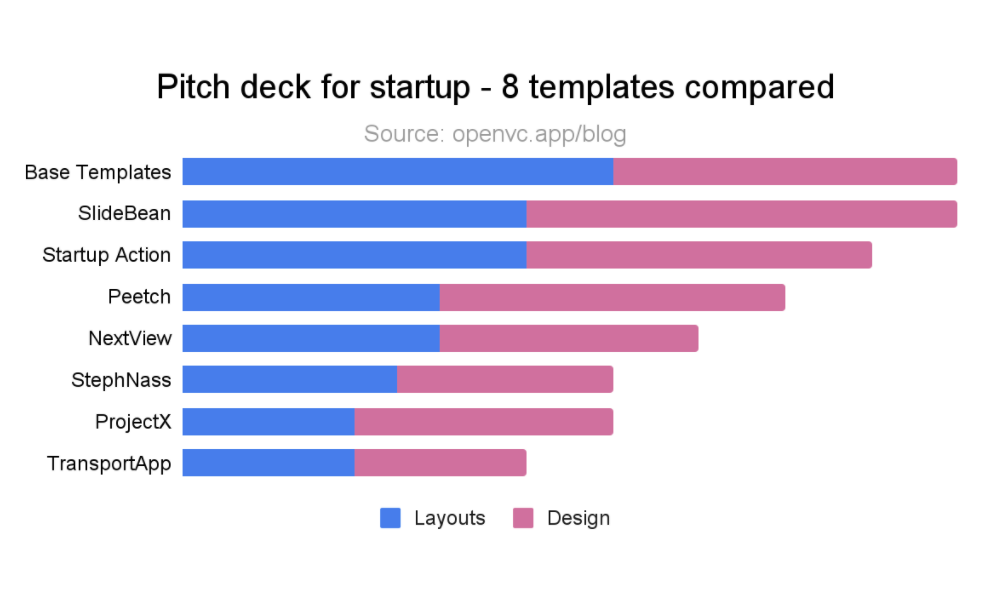 It's really hard to find a good template to build your startup pitch deck. Most of what you find online - both free and paid - sucks. Either the slides are ugly, or the deck is poorly structured, or both. 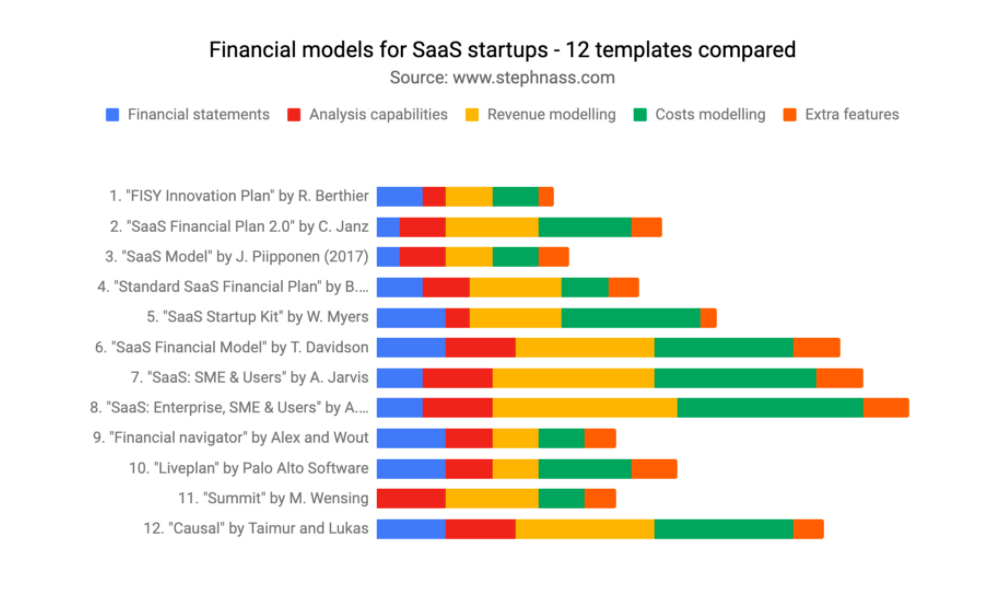 Need a financial model for your startup? Fear not. I have extensively compared the top 12 templates, free and paid, so you don't have to do it.